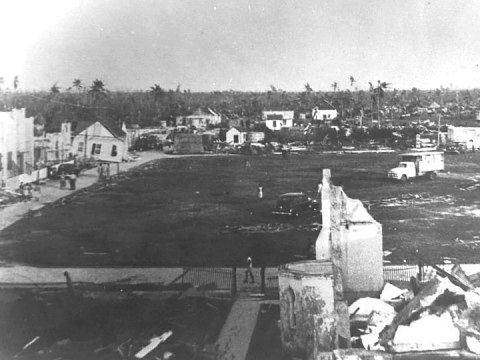 Today aged over 70, Aida Garcia was 27 when Janet struck. She was a housewife in Corozal Town. She was sheltered at Santa Rita Hill at the rum distillery belonging to Mr. Luis Ramirez. She went to the shelter with her husband, Gregorio Garcia, and four children ages 5, 3, 1, and 2-month-old baby.

She says that around midnight the ceiling of the building blew away and the people became desperate. Mr. Garcia overturned vats (wooden containers) and put his wife and children in them. The other men did the same for their families. They spent the rest of the hurricane inside those vats. There were some minor injuries but everyone survived.

Emeterio Bacab, a cane farmer, was 21 when he heard there was a hurricane coming. He and his family started preparing their things and asked for shelter. He says no help was available so they stayed at their own little hut. When the hurricane started the wind blew very fiercely. They heard a loud noise when a neighbor’s roof caved in. Mr. Bacab and his brothers went to help, and a post fell on Mr. Bacab’s shoulder. He was taken to a shelter to be treated. After the hurricane everyone helped each other find missing persons and to recover what belongings they could. He worked very hard to get back the things they had lost.

Maria Gomez, now a housewife, was about 12 years old, living in a two-story wooden building in Corozal Town. Her parents heard on the radio that Janet was coming, and took their family to the Corozal Town Hall. The wind got so strong that the walls were cracking and the building seemed about to fall. The wind stopped but the radio said not to come out until they said to do so. They ran out of fresh water and had to drink muddy water. Finally the radio said they could leave their shelters.

Maria remembers that her father had gotten drunk, and told his wife to go home and make tea for all the people that had sheltered at the Town Hall. When they got home they saw their house on the ground with all the other buildings, and her father started to cry because they had lost everything. She said she still remembers it very well. 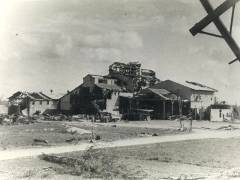 Carmita Garcia, now a housewife, was 10 years old when Janet struck Corozal. She was one of many youths who had never experienced a hurricane. She remembers sort of hoping that the hurricane would strike Belize, not knowing the tragedy that awaited her family. She lived at Aventura with her father, mother, three sisters, and one brother. They heard over the radio that the hurricane would strike and they all made preparations. Carmita’s father told the children not to run outside for any reason, even if the house was falling on them.

The hurricane arrived and the Garcias were sleeping while the winds blew stronger and stronger. The house was falling on them and their father told them to go under the bed, but the wind opened the door. Carmita and her other little sister panicked and ran outside for safety, not realizing that they were endangering their lives. The wind blew Carmita about six miles from her house into a big hole in a tree trunk. There she spent many hours of hurricane, wind, thunder, and lightning. Her other sister, Linda, was also blown away by the wind but she was stuck to a big tree trunk not far from the house. A piece of a zinc roof covered the opening of the trunk where she passed the rest of the hurricane safely.

When whe hurricane was over, everything had been destroyed. Carmita’s parents and friends began look for the girls, and Linda was found that same morning. But Carmita was not found until the seventh day of the search. She remembers that an old man with a big hat took care of her. When she was found she had on her waist nine corns and two squash cups called "leke" in Mayan. The bush doctor told her that it was the Tataduende who took care of Carmita. She is presently living at San Jose, Orange Walk District, with her husband, nine children, and many grandchildren.

Felipe Loria, a farmer from Xaibe Village, was 30 during Hurricane Janet. He says that recently, when Hurricane Mitch was threatening Belize, he heard youths talking about waiting to experience the hurricane. He said these youths did not have the slightest idea of what a hurricane is. He prays to God never again to experience one.

Mr. Loria can recall when he and his wife and four children went to shelter at the only safe place in the village which was the church. At that time Xaibe was very small and only a few people lived there. Everyone sheltered at the church for safety. Before the hurricane started the wind was calm, but soon it became so strong that most of the windows of the church were blown away. About ten men were holding the front door to keep the wind from taking it also. Then the door came loose and the wind blew it away along with the men who had been holding it. Everyone in the church began to pray. AFter the hurricane the only building left standing was the church, but without windows or doors. No one was killed but most of the men were injured. There was no shelter, food, or water left to drink. All the trees had been blown down and you could see the sea from the village.

Thanks to the following for this topic:

Printed from https://corozal.com — Survivors of Janet.